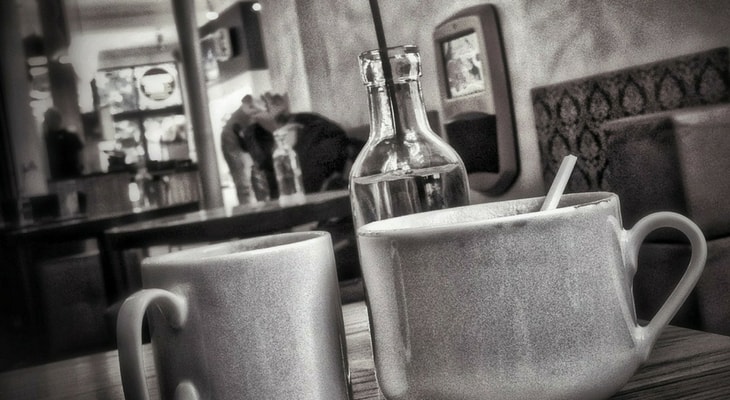 The Battle of Coffee vs Tea

There’s nothing like that first sip of aromatic, steaming-hot coffee in the morning. What’s that, you say? Do I mean tea? Right. There’s nothing like that first sip of soothing hot tea in the morning. Come on now, I can’t please everyone! How about we just all agree on a sweet, comforting mug of hot chocolate? Like dogs versus cats, when it comes to tea versus coffee, you’re firmly on either one side of the fence or the other; I’ve yet to meet a person who is on the fence over this debate.

The battle of tea versus coffee is an ancient one, which started far away from the hallowed Starbucks and box of Yorkshire Tea. It’s a battle that began in earnest in the 17th century, when coffee began to cross over to Europe and beyond, imported from its countries of origin: Persia, Egypt, Syria and Turkey. Although coffee only became known and consumed in the 15th century, the humble cup of tea has been kicking around civilisation for thousands of years, since its first recorded use in China in the second century BC – so tea pre-dates coffee by about 1,600 years.

Here in the UK, we have a rich culture that revolves around the humble cup of tea: it’s as representative of us as corgis are of the Queen, or David Beckham is of football. However, that could be about to change. Coffee consumption is on the increase globally, and in the majority of countries around the world it is the more popular beverage by a long run. Is it time to get on board with the rest of the modern world and embrace coffee as our new favourite drink? Let’s explore and compare these two beverages and see how they stack up against each other.

Apparently, coffee is the second most traded commodity in the world, outranking natural gas, gold and sugar, and over 400 billion cups of coffee are consumed globally every year.

According to the Allegra World Coffee Portal, coffee consumption is definitely on the rise in the UK. In the last decade, the number of coffee shops here rose by nearly 15,000, and 80% of consumers visit a coffee shop at least once a week. In comparison, tea bag sales have fallen by 13% in the last few years. For now though, tea continues to be our favourite drink. The UK Tea and Infusions Association tells us that over 156 million cups of tea are still being drunk here annually, in comparison with a measly 70 million cups of coffee.

There are tons of studies available on the Internet espousing the various pros and cons of drinking tea or coffee. Let me boil it down to the highlights for you. Tea helps to prevent the development or progression of type 1 diabetes, and reduces the chances of heart attacks, heart disease and some cancers. The fluoride in it also helps protect your teeth. Coffee has a plethora of super-powers too. A few cups a day can prevent type 2 diabetes, decrease the risk of some cancers, strengthen the liver, and help promote short-term memory retention. Both drinks are scientifically proven to help with the above, and a great deal more! As with everything, there are some downsides: the tannin in tea can inhibit the amount of iron in the body, leading to anaemia. Coffee can cause tooth discolouration and decrease blood flow to the heart. Larger amounts of caffeine can also cause problems for people with high blood pressure.

There are other things to consider in this battle of the beverages. Sustainable production and human rights are equally important in today’s world. With modern high production demands, coffee isn’t grown as sustainably as it used to be. Traditional shade-growing methods are being overtaken by less natural and holistic methods, meaning that more herbicides and chemicals are used, and more forest is being destroyed to make room for coffee in the developing nations where it is produced. Tea requires less intensive processing to head to market, since it’s basically just dried plant material. However, its production can also destroy natural habitats, and, like coffee, the use of fertiliser and chemicals can pollute local waterways.

As with any product, these negative impacts can be avoided by supporting companies who use organic practices, or have certifications such as the Rainforest Alliance Certification. And going for fair trade ensures that no human rights issues have occurred in the creation of your cuppa.

What about affordability? Well, both tea and coffee can range in price from the cheap and nasty to the ridiculously fancy hipster boutique. But just for reference, the cheapest coffees are still twice as expensive as the cheapest teas. Weirdly enough, at the opposite end of the spectrum, the really fancy teas cost twice as much as the most premium coffees. So, on affordability, it’s all a matter of taste.

If we look at the cost of producing said beverage, however, it’s a different story. In general, unless you’re really old-school, making a cup of tea is as simple as dangling a tea bag in a cup of hot water: no fancy equipment needed. However, unless you’re drinking instant coffee (and why on earth would you?), you will need to purchase one or more fancy pieces of equipment to make a cup of coffee, depending on how involved you want to be in the process.

So, do we have a winner? It appears not. Personal taste is often dictated by what your family drinks, a tradition passed down for generations, although the new and novel does have its appeal. Coffee drinking may be on the rise in the UK, but over in the US, traditionally a nation of coffee-addicts, tea consumption is surging. Perhaps it’s a case of just wanting something different. Overall, the general market trend is showing increased consumer interest in new innovations of both products. In a similar way that craft beer and boutique spirits became the latest obsession of the hip millennials, specially crafted teas and coffees with different flavours and modern twists seem to be the way of the future.

What are you thoughts on the matter?