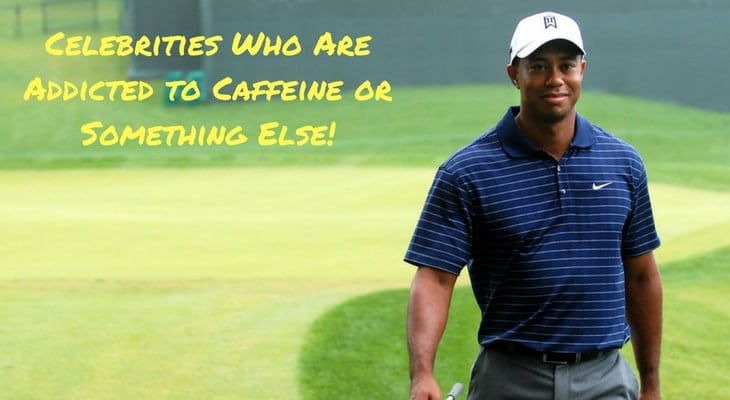 Celebrities Who Are Addicted to Caffeine

I have always been in awe of those celebrities who seem to have endless amounts of energy and look flawless at any time of the day or night. I wonder how they maintain a bright, upbeat demeanour for the endless rounds of interviews, premieres and social events when I can barely maintain energy long enough to chat with the owner at the corner shop after work. No doubt this is due overall to an endless entourage of chefs, nutritionists, stylists, trainers and other staff that number more people than my entire extended family, but I suspect there is another secret weapon at play here: coffee.

Google “Britney Spears” and you’ll be hard pressed to find a photo of her going about her day without a cup of Starbucks in hand. OK, so she’s a little bit passé these days, but take a look at the Kardashians, Justin Bieber, Ariana Grande – actually pretty much any of the current hot young things – and you’ll find that a giant cup of coffee is just as much an essential accessory as the latest designer handbag.

This is nothing new; the grande cup of history is full to the brim with celebrities who have not only relied on a steaming cup of coffee to provide them with energy and inspiration, but who, in some cases, have downright worshipped the liquid gold.

Nearly 300 years ago, some of the biggest musical celebrities of their time relied on coffee to fuel their creativity. Johann Sebastian Bach was so besotted with coffee that he wrote a seven-minute-long composition dedicated to the beverage. He was a bit of a rebel, as back then coffee was considered to be a blight on society and officials were planning on banning it. Bach wrote his “Coffee Cantata” as a form of personal protest. Composer Ludwig van Beethoven reportedly couldn’t start his day without his own particularly strong blend of coffee. He was fastidious in his perfectionism, demanding that exactly 60 coffee beans be used in the brewing process. This was centuries before the invention of grinders, filters and even simple press machines, so the painstaking process of hand grinding his own 60 beans became an essential part of his morning ritual.

It’s no surprise that some of the finest minds in the world have an addiction to coffee; the unique components contained in the humble coffee bean are scientifically proven to improve memory, sharpen focus and provide the body with extra energy. Coffee also helps to burn fat and minimise the effects of ageing. No wonder it’s so popular among the celebrities of the world: a cheaper and subtler alternative to plastic surgery!

Some celebrities have taken their love of coffee further than just helping to support their local Starbucks. Australian actor Hugh Jackman (star of the X-Men movie franchise) launched the Laughing Man Coffee Foundation, which supports educational and community development programs worldwide. He says, “To me, the smell of fresh-made coffee is one of the greatest inventions.” Ahh, you’re not wrong there Wolverine, we couldn’t agree more.

Martial arts legend and movie star Jackie Chan opened a chain of coffee shops in the Philippines, Singapore and China, and says that “coffee is a language in itself.”

The great philanthropist and actor Leonardo DiCaprio is affiliated with La Colombe Coffee and has his own line of coffee called “Lyon”, with proceeds going to his hugely successful environmental fund. Is there anything this man doesn’t do well?

Famed author, actor and director David Lynch (creator of popular cult show “Twin Peaks”) has a true passion for coffee, drinking between ten and twenty cups every day. He has his own line, David Lynch Signature Cup Coffee, and his movies are liberally sprinkled with coffee references and endless cups of coffee. David waxes poetic over coffee, describing a cup of coffee as “a good friend”, and maintains that for him it is an essential part of his creative process.

Whoever you consider to be your hero, whether it’s a talented musician, actor, renowned author, famed scientist, or merely someone fortunate enough to be born with a famous surname (ahem, Kardashian, ahem), it’s nice to know that we have something in common with these larger-than-life figures, even if it’s something as simple as being unable to leave the house in the morning without a cup of coffee! Comedian Jerry Seinfeld has a great web-series called Comedians in Cars Getting Coffee, and I’ll leave you with one of my favourite coffee quotes from him that sums it all up nicely: