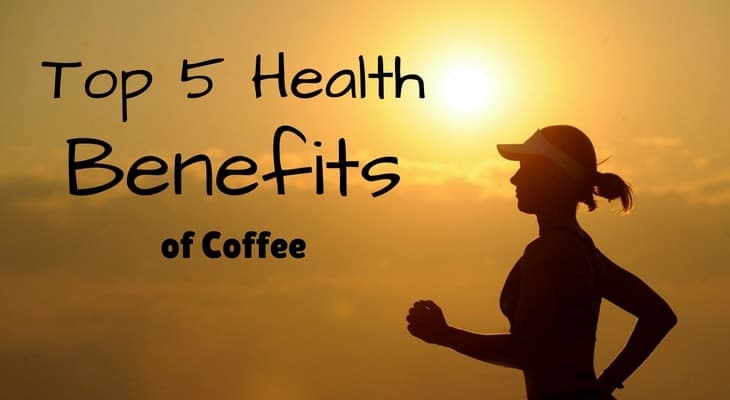 All coffee lovers are acutely aware of the immediate physical and mental benefits provided by a cup of coffee – the burst of energy required to get you going in the morning, the improved ability to focus during a prolonged study or work session – but many people don’t realise that the world’s most beloved hot beverage has extensive health benefits that extend far beyond these short-term effects provided by the caffeine in our cappuccinos.

Caffeine is only one of the thousands of different components found within the humble coffee bean, and dozens of studies over the last few decades have proven that drinking coffee in moderation can prevent some serious diseases, aid in weight loss and mental clarity and help the body to age gracefully. We have picked out the top five health benefits coffee provides, as proven by science; here, then, are five more reasons to enjoy your daily coffee fix.

One of the most well-known and well-studied health benefits of coffee is that it can drastically reduce your chance of developing type 2 diabetes. As with most of these health benefits, this effect only works if you avoid loading every cup of coffee with copious amounts of sugar and cream.

Several long-term studies have had various results, but all agree that drinking several cups of coffee every day can reduce the risk of developing type 2 diabetes by almost 30%. Results are strongly backed up by evidence, with one particular study following over 125,000 people over 18 years. (1)

A later review of research showed that the risk of type 2 diabetes decreases by a massive 9% for every daily cup of coffee consumed. (2) Decaffeinated coffee also reduces the risk, but to a lesser degree than caffeinated coffee, so scientists believe there is some component of caffeine that adds to these health benefits. (3)

Although experts have yet to identify which specific component is responsible for this miraculous benefit, it is thought that the strong antioxidants present in coffee help to improve the body’s sensitivity to insulin over a period of time. The magnesium and chromium present in coffee also help the body to use insulin appropriately.

2) Reduces the risk of stroke and heart disease

The majority of those studies that have focused on the association between drinking coffee and the incidence of stroke have discovered that drinking coffee can indeed lower the risk. Drinking two cups a day can provide a 14% reduction, and three cups a 17% reduction. Research is still ongoing into exactly WHY coffee has this effect, but potentially it is because coffee can reduce inflammation and improve insulin resistance, both important factors in stroke prevention. (4)

Evidence is slightly less pronounced for the reduction in the risk of cardiovascular disease, with dozens of studies done over the last 60 years, some with contradictory results. However, a recent review of the top studies did conclude that moderate coffee consumption (between three and five cups a day) was associated with a lower risk of heart disease. Interestingly, drinking more than six cups per day neither raises nor further lowers the risk of heart disease. (5)

3) Helps ward off depression and lowers risk of suicide

Along with its physical benefits, drinking coffee can also greatly improve your mood – and not only by alleviating early-morning grumpiness. Caffeine stimulates the central nervous system and boosts the production of serotonin, dopamine and noradrenaline, all of which are important mood-elevating chemicals – so essentially it acts as a natural antidepressant.One study showed that drinking just two cups of coffee per day can lower the risk of suicide by up to 50%. (6)

More is not necessarily better, though; previous studies have shown that drinking more than six cups a day can potentially increase the risk of suicide.

4) Reduces the risk of Alzheimer’s and dementia

Not only does coffee keep our minds sharp and focused in the short term, but there is an increasing amount of evidence that it can protect against age-related degenerative diseases such as dementia and Alzheimer’s.

Caffeine blocks inflammation within the brain, particularly in the areas where cognitive decline can start. Amazingly, drinking coffee even after the start of mental decline can delay or reduce the onset of further problems.

One study, using adults over the age of 65 in Florida, found that those who had higher caffeine levels in the blood avoided the onset of Alzheimer’s during the course of the study. Scientists aren’t sure yet whether this effect can prevent Alzheimer’s completely or delay the onset, but either way it offers some form of protection against this disease. (8)

Other studies have been undertaken to try to identify specifically how coffee does this; decaffeinated coffee does not produce the same positive results, and caffeinated water also fails to have an effect, leading scientists to believe that caffeine must interact with another component in coffee in order to produce these results.

5) Reduces risk of some cancers

Although research into coffee as an aid to lower the risk of cancer is still ongoing, there is increasing evidence to show that certain types of cancer are reduced in coffee drinkers. Notably, the risk of liver and endometrial cancer was lower in coffee drinkers. One report showed that coffee may reduce the risk of liver cancer by 14 percent for each daily cup consumed. (9) Results were similar for endometrial cancer, with each daily cup producing a 7% reduction (interestingly, results were similar for decaffeinated coffee). (10)

Scientists think that the ability of coffee to improve insulin sensitivity, and also to prevent long-term chronic inflammation, are important factors in this research, as both things are thought to be part of the process of cancer development.

Research is ongoing into the effects of coffee on other cancers too, with early signs indicating that coffee may help reduce the chance of liver and skin cancers.

As with all things in life, there can be too much of a good thing. Moderation is the key. Doctors recommend a maximum caffeine intake of around 400mg every day, which is about four regular-sized cups of black coffee. The many positive effects of coffee consumption are most applicable when using a paper filter to trap some of the cholesterol-raising components in coffee beans, and avoiding overloading every cup with sugar, cream and other extras! However, there is also a saying, ‘everything in moderation, including moderation’, so I think I will continue to enjoy the odd chocolate-, caramel- and sugar-laden coffee beverage from time to time alongside my daily ‘medicine’.